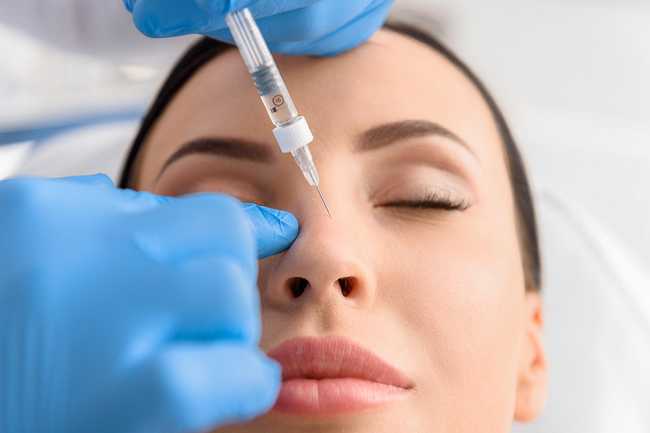 Rhinoplasty, which is often referred to as a nose job, is one of the most desired and common cosmetic procedures across all ages, ethnicities and genders. Although, the decision to get a surgical nose job is never easy and a great commitment one has to make, including the expense, downtime required, the many side effects and the permanent effect it has on your overall appearance, can create uncertainty for many. Patients can avoid these downsides of surgery by considering non-surgical nose job, a less invasive way to reshape and alter the nose.

Non-surgical rhinoplasty, also known as liquid nose job and sometimes referred to as the 15-minute nose job, is an advanced non-invasive procedure that can provide instant reshaping and modifying of the nose. Many of the same goals and similar results can be attained with non-surgical rhinoplasty, but with less risk, less downtime, fewer side effects, less commitment and costs. Although non-surgical rhinoplasty is temporary and not permanent, it is ideal for many that do not want to make drastic changes, but easily maintainable results and no commitment to permanent changes to your appearance. Dermal fillers, specially designed for non-surgical nose job, can address and correct your appearance with instant results and numerous benefits.

The primary benefit of non-surgical nose job is that no surgery is involved and practically no downtime. You do not have to take time off work to deal with prolonged healing and swelling of the nose; you are free to immediately resume your regular routine. Whereas, the traditional rhinoplasty comes with various risks associated with surgery, including risks of infection, bleeding and bruising since you would be going under the knife.

Non-surgical nose appointments can last as little as 30 minutes, including consultation time, with the treatment taking no longer than 15 minutes, allowing you to get back to living your life with minimal disruption. Moreover, the patient can be as engaged as they like, as there is no general anaesthesia; you are able to see the results unfold as the injections are administered.

Surgical rhinoplasty can require up to two weeks of downtime, constraining you to put your life on hold while you heal. While most patients find the results of a surgical nose job to be worth the downtime, some patients cannot afford such time off.

Non-surgical rhinoplasty is done by injecting fillers strategically into patients nose to improve the contours and reshape it. This is usually done with dermal fillers made of hyaluronic acid, a gel like substance that is naturally found in the human body; a few tiny injections can equal big improvements in the appearance of one’s nose. Hyaluronic acid has gained a reputation for being safe, effective and a good alternative to surgery. Revolax, Juverderm and Restylane are the most effective and well-known dermal filler brands that are used for non-surgical nose job.

Surgical rhinoplasty involves greater risks than non-surgical rhinoplasty, with longer recovery time needed due to swelling, bruising and healing time. A second surgery on the same area can only be done after a year, when the area is completely healed. If complications occur after surgical treatment, it will be more difficult or not possible to fix, as surgical treatment can permanently alter the shape of the nose, making it physically smaller and structured. With non-surgical rhinoplasty, it will not make the nose bigger or alter the actual size permanently, but a straighter and more defined nose gives the illusion that the nose is smaller and in harmony with the other features of the face. Furthermore, if results are not what you wanted, or a serious complication occurs, the clinician can dissolve the filler by injecting hyaluronidase.

Risks are involved in both non-surgical and surgical rhinoplasty due to the area being complicated. As certain arteries at the end of the nose connects to the eye’s retina, vascular complications can block the blood vessel, leading to blindness. However, such complications are very rare and uncommon, especially in the hands of a well-trained, board-certified clinician. Also, unlike surgical treatments, the non-surgical rhinoplasty does not involve any incisions, sutures or anaesthesia; the technique can be safe for almost anyone.

Many individuals come for the non-surgical nose treatment for mild to moderate enhancements in the shape or improvements in the appearance of their nose. One of the major issues treated with this treatment is a prominent bump along the nasal bridge. Strategically injecting fillers in that area, can instantly plump up the area around the bump, giving the illusion of a straighter nose. Another common issue is the drooping nose tip, which can be lifted, balancing well with the straightened nose. Non-surgical nose job can provide this quick fix in the reshaping and modifying of the nose, providing an instant result.

The results of the traditional rhinoplasty are commonly good, but whether good or bad, it will be a permanent result, with results that may lead to over or under correction and potentially poor or unpredictable cosmetic outcomes. Results are not instant and can take a year for the final results to be visible. On the other hand, non-surgical rhinoplasty allows control and involvement in the shape and contours created by the procedure. The patient is able to look at the nose and provide feedback during the treatment as you will be awake and under no anaesthetic, meaning you can have control over the end result. Depending on the filler used, the results can last up to 18 months, but this all depends on the individual metabolism and lifestyle and as results are relatively temporary, tweaks can be made as your face changes over time, allowing you to maintain a natural look.

The benefits of a nonsurgical nose treatment are not permanent, making the treatment ideal for someone wanting to try out changes without committing to surgery or completely altering the nose with surgery, rather it allows the restoring and enhancing of the natural beauty. The treatment is completely reversible with the use of hyaluronidase. For those patients that like the result of the non-surgical rhinoplasty, the treatment can be topped up safely over the years to maintain the result.

Non surgical nose job before and after

The following is an example of the results that can be achieved with a non surgical rhinoplasty procedure:

Surgical rhinoplasty is very costly and is usually a one-time purchase. When it comes to the nose, there are limitations based on the patient’s overall anatomy, so many patients may not achieve their desired look due to the suitability. With greater risk and uncertainty, comes a heavy price.

At Dermamina, our leading cosmetic professionals can perform your non surgical 10 minute nose job for an affordable competitive price of £390.

Dermamina also offers filler packages, which lets you pay for filler quantity and not for the treatments separately. This is great for many that want to achieve profile balance and can be done on the same day, unlike surgical treatments. The same filler used in the nose can also be used in the cheeks, as well as the chin, to create that profile balancing. Patients can save money through this as they can choose how much filler is desired on each area of the face. Indeed, suitability of the filler and area will be checked to see if such amount can be inserted safely to the face.